More than 26 million people around the world are in a situation where conflict and persecution have forced them to flee their homes. Many are currently living in crowded conditions with limited or no access to health care. Half of them are children.

It is well known that prolonged exposure to conflict, stress and uncertainty, without adequate support, can have immediate and long-term effects on children’s mental health.

Over the course of 11 years of conflict and displacement in Syria, for example, many boys and girls from refugee families have fled to neighboring countries and beyond after witnessing things no child should see. Personal testimonies show that the emotional and physical scars inflicted on them years later.

In 2018, Save the Children and the Arsenal Foundation launched a pioneering Sport for Development program – Coaching for Life – with the goal of directly addressing this issue and building a strong evidence base on the power of football to directly support children’s mental health, even in some of the world’s most deprivation.

Now, in one of the largest impact assessment studies of its kind, early evidence indicates that it achieves these ambitious goals.

Save the Children became the Arsenal Foundation’s first global charitable partner in 2011, supporting the charity’s emergency work around the world, as well as education projects in China and Indonesia, and child-friendly spaces in Iraq, Somalia and Indonesia.

Coaching for Life was born from a desire to combine Save the Children’s 100+ years of experience in child protection, including mental health and psychosocial support, with Arsenal’s 40 years of sport for development experience in the community.

Based in Jordan’s Zaatari refugee camp on the northern border with Syria, where nearly 80,000 people have fled the country’s devastating civil war, the program uses customized soccer sessions as a tool to improve the emotional and physical well-being of girls and boys in the camp.

The two organizations built five football fields across Zaatari and trained 14 Syrian coaches to deliver the program, which runs over 20-week sessions. Currently in its seventh cycle, the program consists of six training modules titled “Football for Resilience”, with each session addressing issues such as gender empowerment, managing emotions, learning how to communicate, decision-making, self-esteem and conflict management.

Through play, children can learn social and emotional skills such as empathy, build relationships, and deal with difficult situations and feelings. There is also evidence that physical activity can support children’s cognitive function and reduce the risk of depression.

Team sports in particular are associated with improved mental and social health.

Recent evidence suggests that the association of physical activity with mental health and psychosocial support for people who have been displaced from their homes has contributed to children’s social and emotional development.

However, there remains an evidence gap in the link between physical activity and the mental health and well-being of children and youth in low- and middle-income countries. This is where Training for Life comes in.

From 2018 to 2021, we conducted a systematic program impact assessment to help close this gap, using rigorous collection of quantitative and qualitative data from surveys, interviews, and focus group discussions with young participants, coaches, and caregivers.

Being a part of the program was a feeling of pride, self-confidence and a desire to strengthen my character and personality. The coaches made me feel confident and made me want to excel. My position on the defensive line made me feel like an active participant in the team.”

During interviews and discussions, children commented that Coaching for Life made them feel like they belonged in a group – nearly 90% of children said they always felt safe, comfortable and part of the programme.

More than 90% felt that there was often or always an adult they trusted – listening to them, telling them when they were doing well, or really caring about them. This sense of belonging and the presence of a trusted adult is directly correlated with increased scores for resilience and well-being from children’s questionnaire responses.

Mentioned children enhanced self-esteem, self-esteem, confidence, and improved problem-solving and regulation of their emotions. Some spoke of their increased ability to make decisions and the feeling that they could do whatever they set their minds to.

Children, caregivers, staff and stakeholders identified communication skills and the ability to interact with others as key areas for improvement. Male participants tended to emphasize treating others with more respect, kindness and less aggression, while female participants talked about learning how to express themselves better, speaking up, and overcoming their shyness. The program now has a 50/50 gender split. 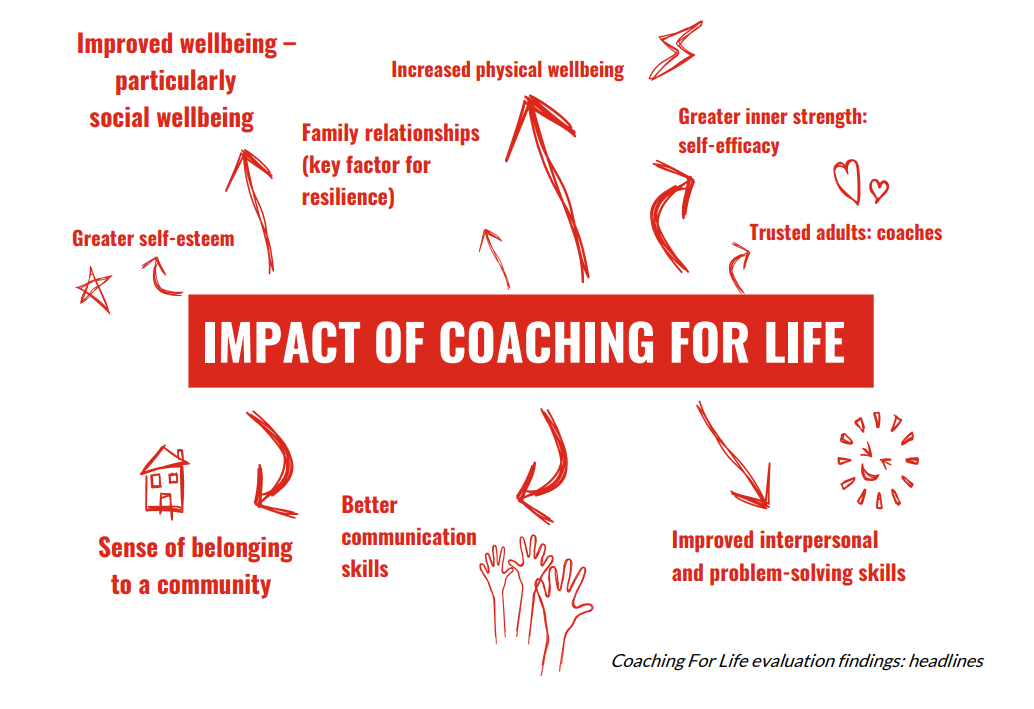 For girls in Zaatari refugee camp, the Syrian conflict has pushed them there and COVID-19 has had a major impact on their lives over the past two years, with rates of child marriage and gender-based violence increasing in the camp since the start of the pandemic.

However, thanks to Training for Life, the girls were empowered to stand up for their rights and help break down sexism in the camp. Through the programme, we teach girls to become advocates against child marriage and gender-based violence, as well as advocate for their rights to education and the opportunity to play sports.

We have helped remove the stigma of female participation in camp sports, which is traditionally seen as reserved for men. We have made sure that girls feel safe to participate in the football program by setting up women-only football pitches that are covered with privacy and we have hired female coaches to deliver the program in the girls-only centers. In addition, we have ensured that the program operates within school hours for the girls in the camp so that they can continue their vital education.

We have seen real success in getting girls into Training for Life, girls’ participation has doubled since the program started and attendance rates in the program have reached 100%.

Survey data indicate that the program has been particularly effective for children who are not part of the regular and structured learning opportunities where they interact with their peers. There was a significant improvement in the resilience and well-being of out-of-school children at the start of the program (25%) compared to those attending school.

The results of this assessment serve as a heartening reminder of the power of sport for development. They’ve also provided helpful insights and recommendations to help us improve the future of Coaching for Life.

We have learned, for example, that more needs to be done to address the barriers children face in accessing playgrounds, a gender-transformative approach that challenges gender norms and stereotypes, invest in the development of our coaches and explore the role the program can play in influencing more broadly . societal change. This will be where our focus will be in the future.

Mairead King is director of the Arsenal Foundation. Mairead’s experience in Sports for Development comes from her 6 years at Save the Children working in partnership with Arsenal FC. I am passionate about the need to measure the developmental impacts that football can have on the communities in which we operate.

Arsenal Football Club has always understood the power it has to bring people together and make a difference in society. From North London to Zaatari, Arsenal Foundation He uses the power of football and the connection with the Arsenal family to inspire and support young people locally and around the world. Working as a team, Arsenal and Save the Children combined their expertise to create a unique programme, funded by the Arsenal Foundation, that supports the mental health and well-being of children affected by conflict and violence in the Zaatari refugee camp.

save the Children It exists to help every child get the chance of the future they deserve. In more than 100 countries, including the UK, we make sure children stay safe, healthy and educated – finding new ways to reach the children who need us most. For a century, we have advocated for children’s rights and made sure their voices were heard. With children, for children’s sake, we change the future forever.