England coach Gareth Southgate said he was “surprised” that 36,000 people were allowed to attend Saturday’s Nations League match in Hungary despite a UEFA ban on spectators.

Thousands of children will now be inside the Puskas Arena in Budapest on Saturday night for England’s opening Nations League game, but there will also be 3,600 adults in attendance.

The Hungarian Football Association is required to play five matches behind closed doors after being disciplined by both UEFA and FIFA for repeated racial abuse from the stands, but UEFA rules allow an unlimited number of U14s to attend the match – with one adult given access to all 10 children .

England players were subjected to racist abuse by Hungarian spectators the last time they played at the Puskas Arena in September last year – incidents that contributed to UEFA’s sanction in the first place.

“We are all surprised but we invite the kids to our playground [against Italy at Molineux on June 11], so I wasn’t really clear about the rules. I don’t know what the number should be, Southgate said at St George’s Park on Friday.

“We have to make sure we are consistent in our beliefs, the attitude that we take as a team, and that we are united in its being unacceptable. Once we apply the sanctions, we’ve gone too far anyway.”

He added: “I imagine Hungary would feel the same way we do about having restrictions on their home game – and they wouldn’t want that to happen again.

“We have made clear our feelings about our position on inclusion and our feelings in terms of racism and its unacceptability.

“We hope that the young people on the field understand why this opportunity is happening. We have to keep doing the right things and setting the right model.

“I think everyone learns from every experience they’ve had. I know our players just wanted to focus on football.”

England captain Harry Kane, who scored during that 4-0 win in Budapest on September 2, hopes the team can put in a positive performance no matter the circumstances.

“We put in a great performance that night in a really tough environment,” Kane said.

“It is up to UEFA to decide what is the best penalty. The most we can do as players is play to the best of our abilities. Try to put in a good performance and try to get the three points.” 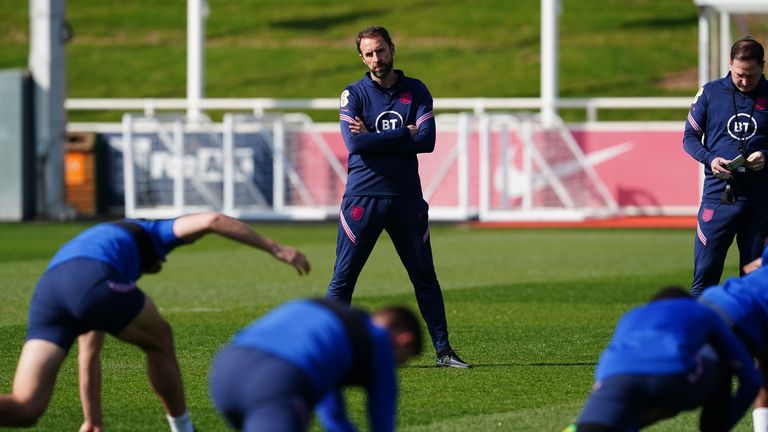 On the pitch, Southgate will be without Phil Foden in England’s Nations League matches with Hungary and Germany after the Man City player tested positive for Covid-19.

Foden has been sent home, but Southgate says he should be available for matches against Italy and Hungary at Molino.

“Phil Foden has tested positive for Covid so he had to leave,” Southgate said.

“I hope he will be able to meet when we get back from Germany. It depends on his symptoms and how his breathing is. It affects everyone differently.”

Southgate revealed that defenders Fikayo Tomori and Marc Guehy will miss the match against Hungary, while Raheem Sterling is doubtful that he missed some training.

“Ficayo and Marc Gueye arrived injured but they are progressing well. They won’t be in tomorrow’s game but it could be good for Germany.

The other 23 players trained as usual at St George’s Park on Friday, and Sterling, Kieran Trippier, James Ward-Prowse and Trent Alexander-Arnold all participated despite joining the group a day later than the rest.

England reached the semi-finals of the first edition of the Nations League in 2019 but finished third in their four-team group last year. This time, they face Euro 2020 winners Italy, Germany and Hungary in their first division group, with the winner reaching the quarter-finals once again.

Southgate’s side will face all of their opponents in the group, including two games against Hungary, in a fun 10-day schedule from June 4-14, with only other internationals to follow in September before the England boss names his side for the World Cup. in Qatar.