The pinball machine is no longer around, but the Race Hub is still located in the same building. Groups have changed over the years, as have the hosts, and today it doesn’t take 30 minutes of NASCAR news and analysis as Foda and Alexander did in 2009, but an hour.

The NASCAR Race Hub has become a staple of Fox Sports programming, with more than 2,100 episodes aired. Most recently, it was nominated for a Sports Emmy for (daily) Outstanding Studio Show, and saw viewership increase 32% from this point a year ago.

RACER’s insider look at how they put an episode together on a day with Adam Alexander, Jimmy McMurray, Michael Waltrip in the studio and Kelly Hambleton as show producer.

It takes place in an area of ​​60 x 60 giant green screen with 3D graphics and changeable spaces. The show employs more than 50 people.

Jason Avery (Senior Coordinating Producer): Oh my, the evolution is amazing. It’s not really comparable. About halfway through 2009, I was told we’d be starting a daily NASCAR show and my guess is we’ll have about eight weeks to do that. So another guy, Neil Sullivan, and I were commissioned to create it. We had a very fast studio that looked like a garage, and we wore jeans and unbuttoned T-shirts. But then, over the years, we’ve gone from standing on our first set to creating an office and a new look by 2011. When we first sat down, our concept for the show was to talk about NASCAR, to be episodic, to have drivers come in and tell stories but also have fun and features . We were kind of doing that back then, but it was on a smaller scale than we do today.

This Tuesday, after racing this weekend at Texas Motor Speedway, the day kicked off with a 9:30 a.m. production call on Zoom (something that’s stuck since the pandemic because it’s so much easier) with the production staff and talent. It was led by Hambleton.

Hambleton is the first female to produce a Race Hub. Initially, I worked as an emergency assistant on an already assembled show. About a month later, she had the opportunity to produce again and build the show herself. 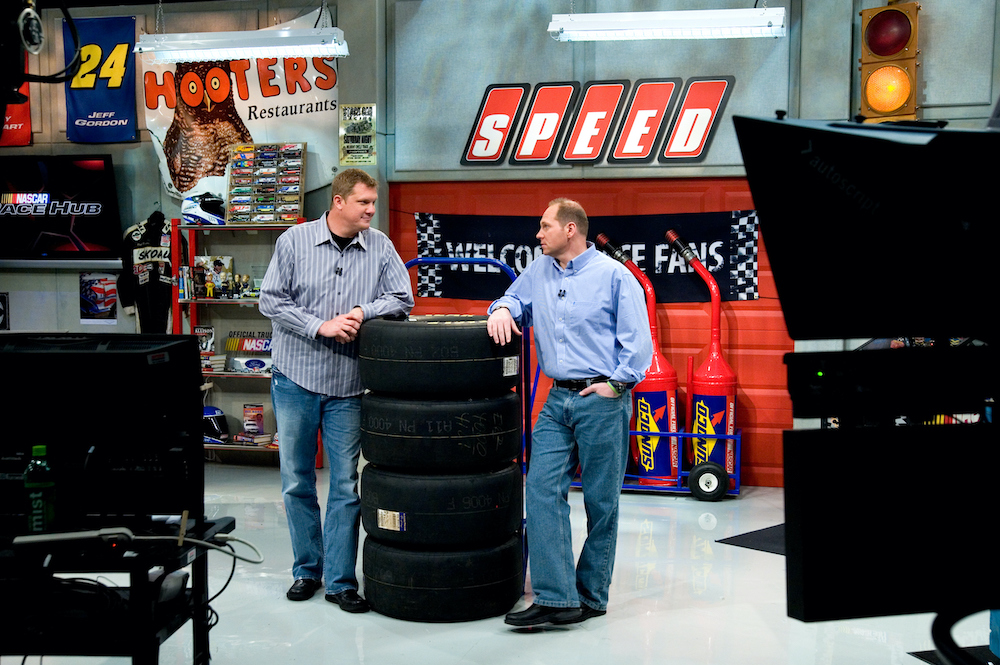 Adam Alexander (right) and Bob Dillner (left) on the Race Hub while recording at Speed ​​Headquarters in Charlotte in 2010.

Kelly Hambleton (Producer): NASCAR is a TV series, and there’s a new drama every week, so you never want to chain yourself up about how they’re covering it. For me, however, it helps to start each new view with an empty file. If I do a show on Monday, I’ll do the rundown right after the race is over. Everyone depends on knowing how the show is going, so I try to get summaries for people at least 24 hours before the show. This gives everyone time to make notes and gives the drawings time to build.

Hambleton’s approach is simple: fans in the pub should be able to catch up on the show.

KH: I think sports TV, in general, should be because that’s where a lot of people watch.

Hambleton provides a layout for the show’s direction before handing it over to Alexander. For an hour, the call is like a group of friends sitting talking about the race and their thoughts on what they saw over the weekend.

There is a back-and-forth exchange between the talent and Hambleton, who creates a rundown of how the conversation moves from one topic to another and the points Alexander, McMurray, and Walltrip should make.

KH: Some talents like their ideas, and some talents like to veer in a certain direction, so they know why we’re talking about something. Everyone is different. Jimmy will come up with whatever he wants. But Bobby? Bobby does all kinds of things, so when he comes here, he just needs to know what to talk about and prepare himself for it.

Adam Alexander (host): I definitely love being a part of the process. I haven’t done that with Kelly, but it’s not unusual for me to be here (the day before) doing a show and on Tuesday the producer says, ‘Hey, stop when you get the chance. I wanted to ask you a few things, and then we would cooperate on part of something we wanted to do and get my opinion or it accepted. So, I like to be a part of the process. Jamie might argue that I’m a control freak, but I just enjoy the creative and idea part of it.

Jimmy McMurray (Analyst): The host and producers have a really good idea of ​​what your answer will be anyway, so they know how to ask the question. But Adam’s role is significant in that call. The host is just as important as the producer, because he has a pretty good idea of ​​what Michael and I will say because he has worked with us a lot. The worst thing you can do is walk out and not believe what you’re saying. And if you believe it, you don’t have to memorize it. It might be interesting to see Michael’s notes and mine before the show starts, because I can only imagine. Adam’s notes. Adam is basically all in his head and on delivery of the goal.

Michael Waltrip (Analyst): I like putting them together, and it’s my job to interact with Kelly and the other analysts for ideas on what makes this conversation more interesting. Sometimes it’s completely different from what you suggest, and sometimes it’s different about the things I see or how I think about them differently than someone else. It is a balance. 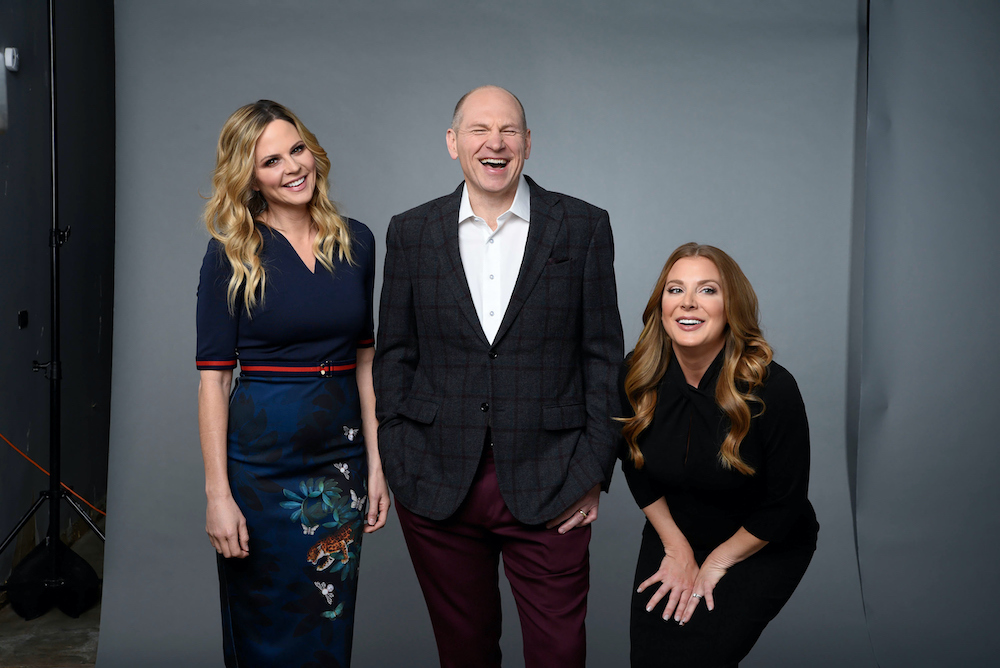 Shannon Speck (host): I’ll receive the rundown in the morning, and I’ll usually write the presentation before our meeting. So I bring my kids to school, sit down with the rundown and write it down. I would rely heavily on what they put together, but in the end, I’m the one who has to take us from one topic to the next. And if I feel like there is something that can bridge that and make the transition smoother, I would definitely suggest it. Or if you feel like something needs to be moved from one area to another to make that smoother, I’d suggest that too. I’ll shoot a text, and when we have our meeting, I’ll ask it again. Now, if the producer makes a really good argument for why they think it should be, that’s fine too. I can adapt. But I’m the one who has to stand there and know the flow, and if it was choppy for me, I wouldn’t go into that rhythm, so it’s very important to make the changes I think are necessary.

No roster is the same with different hosts and analysts scrolling through the show every day (and different producers). No show due to changing opinions.

SS: I think that’s really important and probably one of the only ways you can do a NASCAR show every day because, let’s face it, for five days, we’re talking about what happened on the racetrack. We ask the same questions Monday through Friday, but we get different perspectives because it’s with someone who’s been on the right track or with the staff.

Caitlin Vinci (hostess): I think variety is a good thing, which is three very special hosts with three completely different approaches and deliveries. We have a variety, and it’s exciting to see. There is something for everyone involved in the show to admire.

Separate from the rundown is talent preparation.

AA: I try to read (everything) and be well versed in sports and numbers. My habits in the first half of the year are great because I’m streaming Xfinity, so I naturally do this prep work and oftentimes that work goes into a cup, even though I don’t do cup work on the weekend. I think I’m naturally ready to talk about something, and what’s important to me in the process is rehearsal. I love the unwritten, raw talk on TV. This is another reason I like to be a part of the preparation process, because I know how normal it is to go from point A to point B. If I’m a part of that, I can start the training process in my head how I’m going to do it. I think I’m ready, but I don’t like being typed. I just prefer to interact and keep it conversational.

J.M.: Mondays and Tuesdays are usually about reaction to the race, and as long as you watch the race, you don’t have to read as much. If you do it on wednesday, thursday and friday, it naturally moves to the weekend, so to me this is more like a pre-race show where you look forward (to that racetrack).

MW: We have a great stats team, and there are calls and chats with them about the things I’m going to talk about, and I want to have more knowledge to say. For example, today on the call, I said I was going to talk about Christopher Bell and Martin Truex with absolutely no concerns about doing the playoffs because they would win. Then I call (statistics guys) and say, Now, I believe that, and I’m pretty sure I’m right, but statistically speaking, what makes me right? So I say all that (expletive) on TV, and it makes it sound like I know what I’m talking about, and I an act I know what I’m talking about, but if you tried to pin me down on these numbers…if I didn’t do my research, I wouldn’t have that information.

SS: NASCAR is a lifestyle. I watch every Race Hub, so I watch it when I’m not around. We get the stats sheets. We have production meetings all week. On Tuesday, we have the Xfinity Series race production meeting. Cup Series Race Production Meetings. I’m on those calls. I listen constantly to what the broadcast will be talking about or interested in because I think it’s important that we relate to that. We’re kind of a big TV show, whether it’s the Race or the Race Hub, and we should all be talking about the same storylines.

KV: The power will never be unplugged for you any day of the week, so the race starts on the weekends. I spend most of my time watching the races for all three series, and I have to connect to any activity on the track. So if you haven’t been connected to the weekend, you won’t know the bulk of the storylines going into the week on the Race Hub. Our dates vary from week to week, so you can be in one day with a Trucks segment, or an Xfinity segment. You don’t know, so you have to know everything that’s going on. Then there is also an ongoing line of communication with the producers of the storylines. I’m someone who puts more in the brood for analysts because I think it benefits them, especially if we’re standing still. You cannot have any papers in front of you.